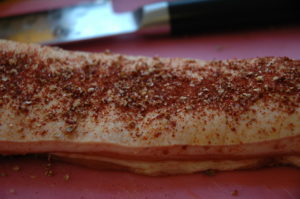 ne of our working lunches, Juan and I were bouncing ideas around on what would be some fun dishes to create / re-create using Don Pilar as an ingredient. Juan was pretty adamant and fired up about doing a tamale ‘with a twist.’ I liked the idea but was having trouble conceptualizing a tamale outside its classic form. And then, like a shot of tequila, it hit me. Instead of using a traditional pork filling, I would use pork belly. Braising the pork in a tequila based mixture for hours, then using the tequila reduction as the base for a sauce. Instead of wrapping the filling, the pork would be the showcase sitting on top of some masa, not hiding from anything. I was very excited about this dish.

It all starts with a wonderful piece of pork belly sourced from Marina Meats. Now, pork belly can be a bit tricky. It has a lot of fat and tissue that needs lots of time and flavor added to it to bring it to its potential. Many recipes use a brine for pork belly and this recipe is no different. My brine included lots of bold spices (chili powder, annatto seeds, ancho chili powder, garlic, coriander, cumin, bay leaf, salt), and I let the scored pork belly sit for as long as I could let it (I would have had it sit overnight, but due to constraints I let it go for about 3 hrs). From here, I wanted to add a nice crust to the belly, so I made a simple dry rub of sea salt, ancho chili powder, and fresh ground coriander. I began to heat up my dutch oven with a little oil to sear the pork belly before braising. Once the oil was hot, I set it in and seared skin side down first for about 3 minutes, then flipped. At this point, I used a half a bottle of the Don Pilar Anejo Tequila to deglaze the pan and start the braising liquid. Then in went some carrots, cilantro, onion, and a jalapeno along with a few more cups of stock. Then in to a 350* oven it went for at first an hour. I didn’t want all of that wonderful reduced tequila to evaporate and go to waste, so at the hour mark, I took the pot out of the oven and strained off all of the braising liquid and set it aside for a sauce. I replaced it with about 2-3 cups of chicken stock and put it back into the oven. The total braising time was about 3 hours, give or take a few minutes.

With the pork belly pretty much cooked (aside from crisping up the skin) it was time to get the sauce just right. Taking the reserved braising liquid from earlier, I started to bring it up to a simmer in a small sauce pot. I originally wanted to do some sort of take on a mole as the sauce, but mole can be, well, a pain in the ass to make. So, with this wonderful reduced tequila mixture, i added just a small piece of of Ghiradelli 60% dark chocolate. And, to be honest the sauce didn’t need much else. I let it reduce a little more until the consistency was right. The heat from the chiles, and savory from the pork, salt & aromatics was wonderful. Combined with just a hint of chocolate and the sweetness from the tequila, this sauce was killer.

For the final plate, I made a quick masa dough (masa flour, shortening, salt, chicken stock), which I baked instead of its usual steam or fry. This was nice, but I made some mental notes for the next round (after baking, I would fry in butter… ya, who am I kidding!). With the plate coming together nicely, I had my good buddy John of Stocklin Photography start snapping some photos. When it came time to eat, the flavors were amazing. After the initial richness of the sauce and savory pork belly taste, I really got a solid hit of the tequila. It was awesome and very pleasant. Not over the top, but very subtle but noticeable. This dish was a lot of fun to make, but even more fun to eat! Can’t wait to see this somewhere soon!!