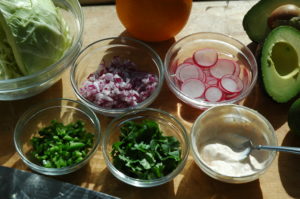 his post comes a bit late for the project it was intended, however the result is still delicious. Blue Moon asked me to create two spice rubs for nation wide distribution in 1/2 ounce packets. Along with the spice rub creation there is a recipe that is attached with it. This one in particular is for their Summer Honey Wheat Ale. A light and refreshing beer with some subtle notes of honey and citrus. The spice pack has some nice complementary bold flavors that pair well with the beer. Smoked paprika, brown sugar, ground mustard, salt and just a touch of cayenne pepper make up the majority of the spicepack. The challenge on this particular recipe was to come up with a seafood dish they could use to promote a value offer with the beer. After much debate, a white fish was agreed upon and the recipe was ready to be built.

I decided to do a refreshing version of fish tacos, using the spice pack as my main flavoring tool. Instead of deep frying the fish in a beer batter (which would be easily done and play very well with the beer), I went with a quick pan fry with the seasoning acting as the breading. I also added a bit of lime zest and some fresh orange juice to add depth and a bit of ‘pop’ to the fish. The fish was tilapia, a nice white fish that has nice texture and can stand up to different types of cooking, and also makes for delicious tacos. The dish wasn’t quite complete, even though there was an array of toppings to choose from. Most fish tacos I’ve encountered has had a very subtle white sauce that really ties the taco together and has you craving more. I decided to use the remainder of the spice pack to help make my faux white sauce. Starting with a sour cream base, I added the remainder of the spice pack, some lime zest and juice. I felt like I needed to add more, but when I tasted it, it was perfect.

This is a fun and very easy twist on fish tacos. Be on the look out for the spice packs in 2012!

Cut Tilapia into _ inch cubes or there about. In a medium sized mixing bowl, take _ the SHW spice packet and coat the pieces of fish along with 1 tsp of fresh lime zest. Toss well until all pieces of fish are coated, and set aside for cooking.

In a small bowl combine the sour cream, remaining lime zest, lime juice and the remainder of the spice pack and mix well until all ingredients are combined. Add salt or sugar if desired.

In a large skillet, heat 1 tbsp of vegetable oil then add the red onion and jalapeño. Sauté for a few minutes until onions become translucent. Then add fish and sauté with the onions and peppers. Keep the fish moving around in the pan so they don’t stick and all flavors combine. After 2-3 minutes, add the juice of half an orange and continue to sauté for another 2-3 minutes then remove from heat and get ready to assemble.

Take small spoonful of the sour cream mixture and spread it on the bottom of your tortilla. Add fish on top of this, followed by cilantro, radish, cabbage and avocado. Garnish with fresh lime and extra sour cream sauce. Makes 4 tacos.