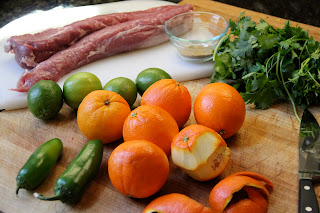 summer projects for Blue Moon have been fun, challenging, and exiting to create. This first recipe comes after a lengthy assignment developing spice rub packets for two of their seasonal beers. After many trials, a digital scale purchase, and some taste tests the spice rubs were chosen for development. The 1/2oz packets will be distributed nation wide soon! So… with the spice rub packet comes a recipe!

The Spring Blonde Spice Rub packet has some sharp flavors that were to be paired/sold with a value offer for oranges therefor this recipe had to call for fresh oranges. When discussing with the team, I suggested since oranges and spices weren’t that appealing on their own they be used as a marinade or sauce. The Blue Moon team was into it and I ran with the idea. I started with the 1/2oz spice rub (Celery salt, ground mustard, brown sugar, black pepper) and about 6 medium sized oranges. I juiced all the oranges, but saved one of the rinds, and julienned that to add some more orange flavor into the marinade. I then built up the flavors by adding half a small diced jalapeno and then some chopped cilantro. I tasted the marinade and it was running a bit acidic, so I added some honey. From there I knew I was close to something tasty. Adhering to the marinade rule (acid, salt, savory, fat) I added some olive oil, as well as some fresh lime juice for some punch. This was looking and tasting good. I added the pork to this marinade and let it sit overnight in the fridge.

The next day, I headed over to the Pollock house to finish this recipe. Ali was roasting potatoes which would turn out to be a perfect compliment to the pork. I pulled the pork out of the marinade and heated up a cast iron skillet until it was smoking then seared the loin on all sides. The pork was then transferred to a baking dish along with just a touch of the marinade to keep the pork moist. It went into a 400* oven for about 25 minutes. I pulled the loins out when they hit 145*. They looked caramelized and delicious. Once rested, I cut the pork loin into medallions and got it all ready to serve.

It’s always fun seeing people eat your food. The best compliments are not necessarily the verbal ones, but the physical acts of those getting up to get seconds and thirds… or Ali texting that she had the leftovers for lunch. I love my job!

Keep an eye out for the spice rub packets in stores! The Summer Honey Wheat Spice Rub recipe will be on this space soon…