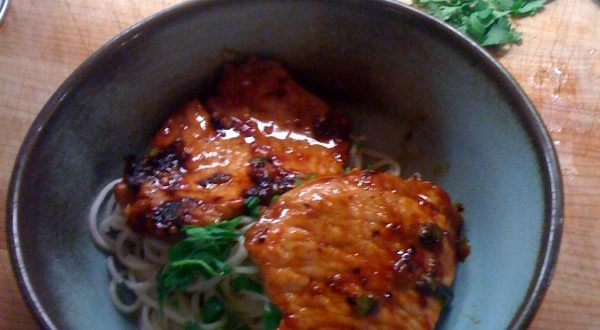 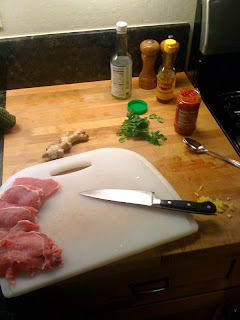 Every now and again I get a huge craving for some Japanese home style cooking. I had bought an extremely large pork tenderloin and had to clean it up a bit before it went to its rightful owner (see Orange Ginger pork loin). So, with the fat and a little aid, I started out on an adventure in making a delicious pork broth for a cold summer nights dinner. Starting with fresh ginger, garlic, and chili paste, the fat was browned a bit before any liquid was added. Also, cilantro stems and more ginger added throughout the process. Instead of adding just water, or some stock, I decided to get a little crafty and brew some green tea. 2 bags of green tea steeped away in about 10 cups of water. This was added to my mixture of pork, ginger, chili paste and garlic, and simmered for a while while also adding a bit of soy sauce and mirin along the way.
In a separate pot, I boiled some rice noodles, strained and set a side (note: a good way to be resourceful, cook rice noodles ahead, mix with a bit of sesame oil, and store in tupperware… noodles ready at any moment for another meal). Also, I sliced some of the pork tenderloin very thin and set aside for the topping to my growing noodle dish.

Broth almost ready, it was time to cook the pork. Hot pan, peanut oil, chili paste, garlic, ginger, the pork went in for its quick fry. The smell alone would get your stomach grumbling.

Pork then added atop the noodles with fresh cilantro and green onions. Faux dashi added, along with a poached egg. This was certainly good eats!