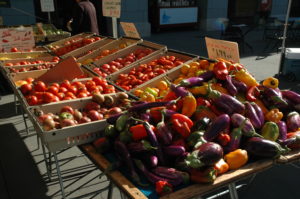 For a few years now, I have been hosting dinners at my San Francisco residence on Thursday nights. Friends would come over with wine and my old roommate and I would cook up a feast. This has evolved a bit over the years as my roommate has moved out and I am doing all of the cooking. In the recent months, I haven’t had a chance to play and try new ideas in the kitchen. I made it a point to make this Thursday different.

I wanted to base the entire meal around what I would find at our local Farmer’s Market. I chose to shop at the Thursday Farmer’s Market at the Ferry Building in San Francisco. For those who are not familiar with the Ferry Building, it is a mecca for food. This beautiful building hosts some of the best and local food purveyors this city has to offer. It is home to the San Francisco Fish Co, Acme Bread Co, Golden Gate Meats, Cow Girl Creamery, and Blue Bottle Coffee just to name a few. It is very hard to go into the Ferry Building and not buy anything to eat on any given day. Add a Farmers Market to this scene, and it’s as close to heaven as a foodie can get.

I started outside at the Farmer’s Market and worked my way into the building. The idea for the starter course was a Duck Confit Salad. As I browsed the stands, I found some exceptional butter lettuce and radicchio. This would provide a great and tasty base for the duck. I also landed on some gorgeous baby heirloom tomatoes. Still in season, I thought this would bring some bright acidity to the richness of the duck. Lastly, I found some frisee that would complement the textures in the salad. Moving inside, I came to Golden Gate Meats. If you want any sort of meat, they will have it, and it will be of extremely high quality. Now, I didn’t have the patience or time to confit the duck myself, so for a reasonable $14/lb I picked up two duck confit legs. Best decision I made that day.

Assembling the salad, I prepared the duck in a little bit of bacon fat and warmed it up in a 400* oven before shredding. I deglazed the pan with some sherry vinegar for the salad dressing adding more and more flavor. The dressing was simple, the salad had lots of textures and flavors, and the duck… oh the duck. This duck confit was the best I’ve had. Kudos to Golden Gate meats for their amazing job on the preparing the bird. This dish was stellar, and here to stay.

Preheat oven to 400* Cook bacon pieces in an oven safe skillet until desired crispiness. Add the two legs of duck confit to the bacon fat and cook 3-4 minutes a side. Place in the oven for about 7-8 minutes, or until warm and easy to shred. Remove duck from the pan, and deglaze with sherry vinegar and Dijon mustard. Transfer mixture to a mixing bowl and add olive oil. Whisk until blended. In a large mixing bowl, combine all lettuces and tomatoes. Toss with dressing, and top with shredded duck.