New inspiration. New recipe. Great results. In an attempt to move away from my fail safe asian style marinade, I grabbed a bunch of citrus and fresh ginger and ran from there. On sale at the market was some pork shoulder cut into country style ribs. Great for grilling, and great for marinades. Since the marinade was an experiment, it took a while to get it to taste the way I wanted it too. Starting with the juice of 4 fresh lemons, I then added the equivalent of fresh orange juice. A little bit of honey, and then a lot of diced fresh ginger went into the mixture. Building on the flavor, I added some fresh cilantro (stems too because it helps with flavoring), and then just a touch of soy sauce, which turned into a bit more than a touch. I then added a couple spoon-fulls of white miso paste and finished with just a touch of sesame oil. The marinade was tasting great. The pork sat over night before it hit the grill. 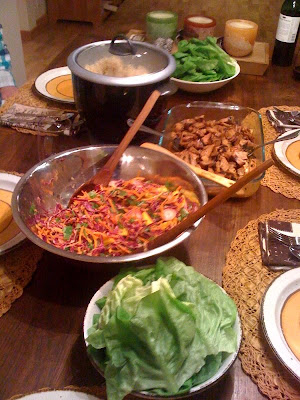 Building on this meal, I wanted to do my no-mayo coleslaw but with some added twists. In the salad went shredded carrots, red cabbage, sliced radishes, cilantro leaves, thinly sliced jalepenos, and some diced mango. Dressed with a mango vinaigrette (mango, lemon juice, balsamic, olive oil, salt, pepper), and some red wine vinegar. This salad was the perfect compliment to the pork. To finish off the meal, the pork was grilled, and the marinade was set on the stove to reduce. I added a bit of brown sugar and some sirracha to help the process. The marinade was outstanding. Playfully added to the table was some butter lettuce and lightly seasoned rice. Wraps were made, and conversation was low. This meal turned out fabulous. Thanks to Ali, Jerry, Nick, & Keith for joining me!