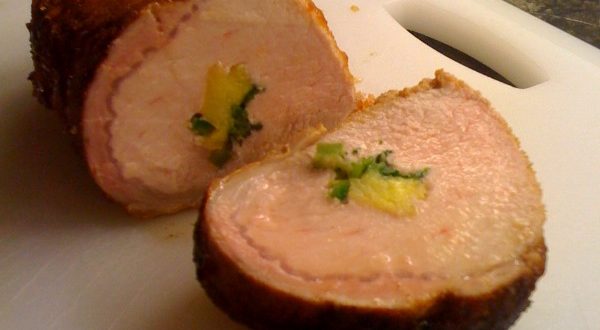 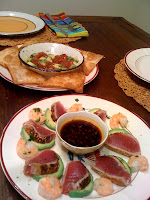 Sunday. Also known as Sunday Funday. This glorious day I hit an inspiration nerve and went to town on some left over raw ingredients from a previous dinner. Pork tenderloin, sushi grade Ahi, pineapple, avocado, and some asparagus were my main ingredients. After much debate, I wanted to try out a pineapple glaze for the pork. After some research, I went to work. Into the glaze: or roughly their abouts… This sat on the stove and was simmered for about 30 min, then stick blended. In the meantime, I took my pork tenderloin, and cut a sizeable slit through the middle. Then stuffed that cavity with a couple generous long pieces of pineapple, 1 Jalepeno, cut long, and some fresh cilantro.

This was ready for the oven. I lightly coated the tenderloin with some of the glaze before it hit the oven. 350* it went in. Brushing the glaze on it ever 15 min or so. The tenderloin came out incredibly moist, and produced some delicious drippings. Served with the glaze on the side.

In addition, I made some seared Ahi, coated in a bit of seasoning salt & sesame seeds. Served withs ome sliced avocados, and scented steamed shrimp.

Lastly, I took the asparagus, and placed it on a bed of cilantro and lime. Added some water to the baking dish, and let it steam in the oven for about 10 min. A lovely compliment!