Shark Wedding, a Big Grill, and 60+ Pounds of Pork

Shark Wedding, a Big Grill, and 60+ Pounds of Pork 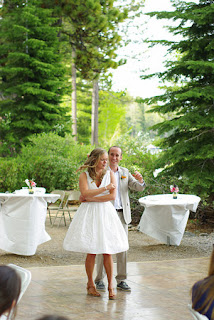 It was memorial day weekend in Tahoe, it was not sunny, but rather nuking snow. I was talked into crashing a wedding by Darcy to go see all of our friends. It was at this moment I approached dear friend Shelly Barnes about her upcoming nuptials. There had been some emails flying around the past few months about food options, ideas, and was ultimately going to land on brats and veggie burgers on a grill. I couldn’t and wasn’t going to let that happen. I had decided a few days prior that I was going to donate my services to Shelly & Mark for their big day, and produce some awesome food. So, fittingly as I was crashing a wedding, I broke the news to Shelly and Mark. High kicks ensued, as did about 100 emails &amp; phone calls leading up to their big day.

After much planning, talking, and recon runs to Costco and the wedding site, we figured it all out. Seven pork loins ranging between 8-11 lbs were purchased. I luckily had a big rubber bin that was easily converted into a marinade container, and an entirely empty fridge. I had never attempted to marinade this much meat before, so my proportions of my signature marinade were going to be tested.

Ali had bugged me about this one recipe for what seemed like a year, so I decided to treat everyone and give it a try. The marinade is fairly simple, though for that much meat actually took about 2 hours to construct. Soy Sauce by the gallon, Mirin by the liter, Miso paste by the bucket, Sesame oil by the cup, 6 bunches of cilantro, 3 cups of fresh ginger, a bag of brown sugar, an entire jar of chili paste, and some white wine for good measure was all mixed very carefully in one of my cooking containers. Then the 60+ pounds of pork loin went in to marinade, or as Emeril says, “Get Happy.”
The meat was on marinade for about 28 hours. Not realizing this before execution, but I needed an extra hand transporting the meat to the wedding location. Who would have thought that 60 pounds of pork and over 2 gallons of marinade would weigh a lot?

The next step was the grill. Boy was it in bad shape. Buried under snow for 6 months, it couldn’t have looked worse. This is when a bit more panic set in. We were 3.5 hrs out from service and the grill needed a lot of work. 7 bags of charcoal, a Josh, a Sarah O, and a Jess and we were in business. Heat, oil, brushes, repeat. The grill was looking pretty by 2:30. Shelly was adamant about the meat being done by 4pm sharp. This is where I got nervous. I had never cooked that much meat without an oven, or any sort of controlled temperature. Sarah and I took to the grill with yards of foil, marinade, and some beer to extinguish hot spots.

At 40 min into cooking, I was feeling good about the meat temps and much more at ease. I wasn’t going to ruin the wedding… thank goodness. When the meat came off to rest, it was go time. Sarah had her cutting station and I had to tend to the rest of the grill items. We were moving. The pork looked great, tasted good, and was cooked perfectly. Ronna, Darcy, Joe and a few others had coyly positioned themselves behind the cutting station picking at the scraps as they came off of Sarah’s knife.

I was feeling great as the food hit the chaffing dishes. People were smiling, eating and happy. Compliments flew in, but my personal favorite was hearing and seeing the Mother of the Bride run back for seconds and thirds.

Many many many thanks to Sarah O, Josh, Amanda, Liz, Ben, JP, The Pollocks, The Barnes’, and of course to Shelly and Mark. What an incredible wedding!! I’m so honored I could be apart of it.