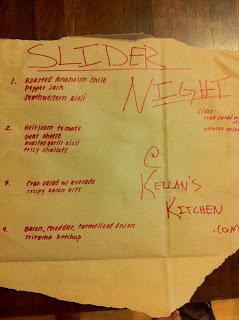 It was a Tuesday night and I was sitting around the house talking with my roommate Amy. We were in separate rooms carrying on a loud conversation about what we wanted for dinner. I started listing things I had in the fridge, and she was firing off ideas and verdicts on my proposals. The menu suggestions went from tacos, to meatloaf, to burgers. Someone mentioned sliders, and we both paused and quickly agreed. We assembled and made the quick trek to Whole Foods to gather ingredients. From just a small thought, came a mountain of fun ideas. We weren’t going to make just one style, we were gonna create 3-4 different sliders. It was time to play.

First and foremost we had to do a classic. I had some delicious black forest rubbed bacon, and sharp cheddar cheese. With the addition of caramelized onions and a srirracha ketchup, that one was finished. Easy.

The second one that came to mind was using goat cheese. We decided to put an heirloom tomato slice, and some crispy shallots. In addition, we agreed it would need a sauce. Keeping on the garden theme, a roasted garlic aioli was to be constructed. A couple leaves of spinach and this one was ready.

The third one took some time to get right, but we were very excited about it. A roasted Anaheim chili would be the inspiration. Pepper jack cheese would be melted, and a south western aioli would be the sauce that bound everything together. This one was mouthwatering.

And the final and fourth slider was tricky. We both wanted something random and different. As we wandered around the crowded grocery store watching all of the neighborhoodies get their organic produce, we landed in the seafood department. Somehow we decided to get fresh dungeness crab. It was discussed and decided that a crab salad would be made, and avocado to top the fourth slider. We were excited.

With the ingredients purchased, the hurricane of prep began. Prepping four different sliders and all of the toppings proved to be an arduous task, but well worth it. Drying and deep frying the shallots, making the crab salad, roasting garlic & the Anaheim pepper, and making homemade potato chips took about an hour and a half. With the sauces were constructed and mini buns toasted, it was time to build. The sliders began to tower as our mouths salivated. Also a last minute dish was a crab salad with an orange vinaigrette and arugula was thrown together as a palate cleanser. 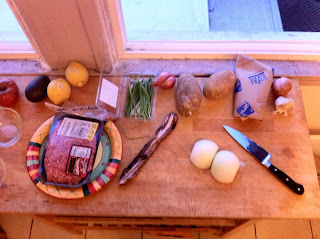 After a few iPhone pics, we dove in. All of the sliders were delicious, but we each had our personal favorites. The goat cheese & heirloom tomato slider was my choice, and Amy leaned towards the roasted Anaheim chili & pepper jack creation. There were definitely no losers in this battle. Cant wait to do it again, this time for more than two people! #slidertuesday.