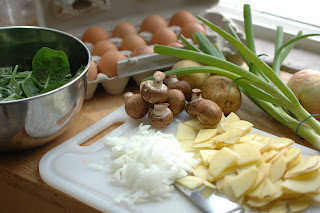 So, your friends are over for a weekend, and everyone seems to have brought a dozen eggs. Your fridge is full of egg cartons and everyone leaves on Sunday. What to do? Sometimes a quiche is in order, but I like to go a different route.   During my travels in Europe, I spent a little over 3 weeks in Spain. One of the dishes I fell in love with was the tortilla, or Spanish Omelette. Always an option at tapas bars, restaurants, or street food vendors, this dish never disappointed. And, it was often served cold! This tasty dish is traditionally comprised of eggs, potatoes and onions. In Spain, you would usually get a slice of the tortilla served on top of a piece of bread, and in some cases a roasted chili on top (I had this version at this tapas bar in Granada). Warm or cold, it was always delicious… and even better with beer!

For this round, my filling was Yukon gold potatoes, shallots, mushrooms and spinach. The cooking method is really what separates a tortilla from a scramble. In one bowl, I cracked about 8-10 eggs and whisked thoroughly with milk, salt and pepper. It’s important to whisk the eggs very well. In a large skillet, I started cooking the filling. First went in the onions and potatoes along with a generous tab of butter. Cooked until the potatoes were soft, the spinach and mushrooms were added with a bit of seasoning. Once all cooked, this mixture was pulled from the heat and set aside to cool for a few minutes. This is then added to the egg mixture, and it’s ready for cooking.

The egg mixture is then poured into a well buttered/oiled skillet on medium heat. This is where your patience is tested. First steps are to use a wooden spoon or spatula to stir and move the egg around so it starts to cook, but not too much. Once you have the egg mixture beginning to set, the heat goes down a little and the pan is left alone… for what seems like forever.
20-30 minutes later, or until you and your friends cant stand it any more, it’s time for the “flip.” The flip is performed by placing a plate, or pan (in my case a pizza pan) over the skillet and then swiftly flipping the tortilla over and sliding it back into the skillet to brown the top (now bottom). I always tend to loose a little of the mixture, but nothing major is lost. The tortilla is then browned on the bottom for a few more minutes then transferred to a dish for serving.

The golden brown doneness of the tortilla is always a crowd pleaser. In this instance, I topped the dish with a roasted jalapeno & cilantro oil which I had made for a previous meal. Served with bacon and a fruit salad, the tortilla went fast. I was hoping to have a piece for a sandwich later on but when I looked back, the plate was empty! This is a wonderful dish enjoyed in all seasons, warm or cold, for breakfast, lunch or even a late night snack!