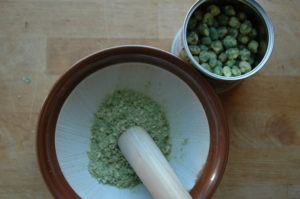 This dish comes as the successor to the Duck Confit Salad post. The Thursday night dinner was an all out independent effort to try out new dishes and expand my recipe collection. After settling on the duck as a starter course, I had my mind set on fish. I had done a lot of browsing through cook books and Saveur Magazine and discovered some interesting ideas with Halibut. It wasn’t until my trip to the grocery store that the idea for the main dish came together. I saw kiwis; a kiwi glaze could be fun with the fish, I thought. And so started the assembly. Kiwi-Ginger glaze, wasabi peas crushed up and mixed with panko for the crust, and a risotto was decided on for the starch. Now, I wanted to do something a little more risky for the risotto. With the tropical, pan-asian theme going on for the fish, I landed on coconut as a flavor base. Coconut milk in hand, along with some prosciutto and gorgeous farmers market ciopolina onions, the idea for risotto was coming together nicely.

I had the ingredients, and finally a solid idea. The execution of the dish is where the fun starts. First, the glaze. I took about 4-5 kiwis, halved them and scooped out all of the fruit into a small sauce pan. I added about a tablespoon of fresh chopped ginger, the juice of 4 limes, and a bit of agave nectar to help the kiwi get nice and sweet. I let this simmer on low until all of the pulp was broken up and loose. After about 30 min or so, I used an immersion blender to get the sauce nice and smooth. I had thought about running it through a strainer to get it very silky and more glaze like, but after the first pass on the immersion blender the sauce was at a wonderful consistency and tasting wonderful. Onto the fish! I wanted to add a nice crust to the halibut. I took some wasabi peas and crushed them into a bread crumb texture using a mortar & pestle. I then added some panko to the crushed peas in order to not let the strong wasabi flavor overpower the delicate halibut. With my crust ready, the Halibut was cut into 6-7oz filets while the glaze simmered. Things were coming along nicely.

To start the risotto, I always like to use some good fat (read: Pork). This time around, I diced up some prosciutto and cooked it in some olive oil until it was nice and crispy. I then removed it from the pan and added some onions. Once those were nice and soft, I added the aborio rice and began the risotto process. Instead of using white wine to deglaze, I used about a 1/4 of a can of coconut milk. At this point, everything was smelling wonderful. Slowly stirring in some veggie stock and some coconut milk every now and then, the risotto was taking form and tasting great. It was time to cook the fish. I had decided that a pan fry with butter was my best bet, as I do not own a salamander or bad ass broiler (read: Christmas gift hints!). The skillet was heating with some olive oil, and the fish went in, crust side down. I added a good scoop of butter and used this to baste the fish. Everyone was getting excited. With the fish resting, I plated the risotto, a shaved asparagus salad, and a delicious spoonful of the kiwi glaze on everyone’s plate. The fish went right on top of the glaze, and after a few snap shots, my friends loaded up their forks with generous bites.

The fish and glaze went perfectly together, an absolute winner. The biggest surprise for me on the night was how well the risotto tasted and complimented the fish. It wasn’t over powering as some coconut dishes tend to be, and provided a great textural balance to the plate. I was stoked. My friends were stoked. This dish will be on the menu for a long time.