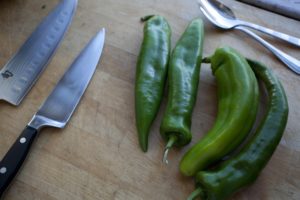 rewing Co wanted to expand their food offerings a bit and came to me with a request for a recipe using the Hatch Chile. This is a wonderful pepper that has both a great amount of flavor and heat. When it’s roasted the flavors are enhanced and the heat is quelled, providing an almost addicting taste. Needless to say, I was thrilled at the opportunity to play around with some recipe ideas. A few thoughts were tossed around, but one idea kept coming up and ultimately was chosen; a stuffed hatch chile. My immediate focus was to stuff this delicious pepper with ground pork. I did a little research on complimenting spices and cooking times, built my base of ingredients, and went to work.

Excited about the recipe, I decided to head to my local Whole Foods to get some very fresh ground pork. Any store bought ground pork will work well, but theres something especially delicious about getting pork ground for you and using it that day. Along with the fresh ground pork, I started chopping a yellow onion, and quickly realized that 1/2 an onion would be plenty. Into the pan went the onion along with some oil to get all of those sugars released and onion nice and caramelized. The pork was then added along with a healthy mix of chili powder, cumin, fresh ground coriander seeds, garlic, and salt. The mixture was sauteed and stirred until the pork was evenly seasoned and cooked. The pork was then transferred to a mixing bowl along with a cup of crumbled Cotija cheese. It was time to stuff. I had taken a knife and cut a lengthwise incision into the chilies and removed the pith and seeds. The warmth of the pork & cheese mixture was just enough to help loosen up the chile to make it easier to get lots of good stuff inside. I had toyed with the idea of using a toothpick to seal the chile, but I went with out it because I thought the over stuffed-ness of the pepper looked pretty and more appetizing. Into the oven it went.

They came out beautiful. Served on top of two corn tortillas along with some garnish of limes, cilantro and radishes. Simple and pretty cheap, I can’t wait to make this dish again!

SPECIAL thanks to John Stocklin and his company Stocklin Photography for coming out and taking some GORGEOUS food shots. Can’t wait to have him back!

In a large skillet, place 1 tbsp of vegetable oil and the diced onion and begin to heat on medium. Sautee onions until they are translucent, then add the ground pork. Stir until the pork & onions are incorporated and then begin to add the seasonings (chili powder, cumin, oregano, coriander, garlic and salt). Stir well and continue cooking on medium for about 8-10 minutes, or until the ground pork is cooked. Once cooked, set a side to cool.

To prepare the chilies, make one long incision length wise on the pepper. Use a spoon to remove the seeds and pith. Be careful not to damage the structure of the pepper.

Take the Cotija cheese and add it to the ground pork mixture, tossing lightly. Using a spoon, take this mixture and stuff it into the peppers. Incorporate as much mixture into the pepper without breaking it.

Transfer the stuffed peppers onto a baking sheet, and place into the 400* oven for 15-20 minutes. Once cooked, remove from oven and place each pepper on top of 2 corn tortillas. Serve with limes, fresh chopped cilantro, and radishes.