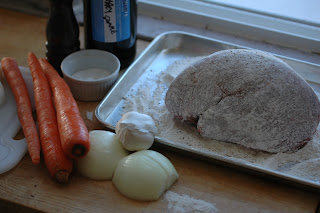 n the conversation first occurred, it was February and cold out. Blue Moon wanted to create an entire holiday meal plan around their seasonal brew offerings. The big discussion was on what would the main meat offering be and with what beer. After a few ideas that didn’t quite make the cut, we landed on beef. I can’t remember what spurred the idea, but a pot roast came to mind. Very humble, easy, and something that seemed fitting for a holiday meal. Plus, it would be easy to bridge the beer into the recipe. Pot roast is one of those dishes that is easy to create, but can be tough to finesse. It can be easily cooked dry, and either way over seasoned, or severely flat and under seasoned. Using the Winter Abbey Ale as a liquid base was incredibly useful in setting a huge flavor base for the meat. Adding a handful of aro
matics and other seasonings I was off and cooking.
After browning the dredged beef chuck roast and setting it aside, the braising liquid was
constructed. Two bottles of beer, Worcestershire, beef stock, onions, carrots, garlic, a can of tomatoes, thyme, bay leaves, salt and what definitely became the secret ingredient, paprika. With this mixture boiling, the beef returned to the pot for its 3.5 hour journey in the oven. 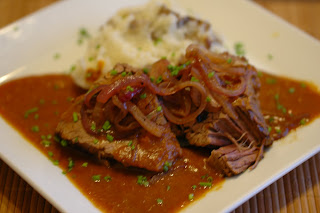 Pot roast is a wonderful dish, not only because it is pretty easy to construct, but its cooking time allows you to get some stuff done around the house. The perfect dish for a multi-tasker. I was able to knock off some chores that had been nagging at me for a month.After a productive 3 hours, I pulled the pot out of the oven for a peak. It smelled fantastic. With most of my prep done for the rest of the meal, I added the final touches to the dish. I pulled the meat out and set aside, covered with foil, also grabbed the bay leaves & bouquet of thyme. Then I took a stick blender to the braising liquid. The onions, carrots, and tomatoes blended up to make this liquid a wonderfully consistent gravy. I put the meat back in, and let it hang out in the gravy for a few minutes while we were getting the table ready for dinner. The camera came out and beauty shots were taken. But the real beauty was how great the roast came out. Fork tender, savory and sweet. Served with some roasted garlic mashed potatoes, this pot roast was rich and delicious. I know it’s summer, but you must try this recipe! Special thanks to Kate for coming over and representing the Blue Moon team!